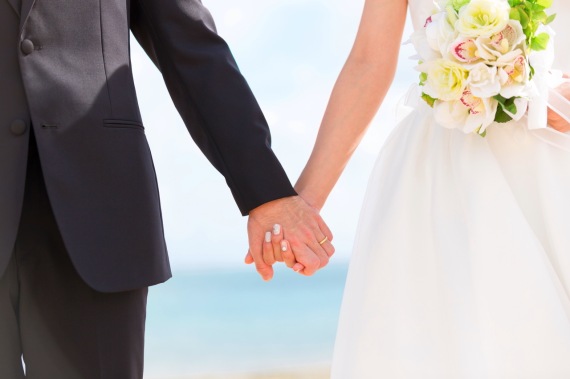 We have all been to a wedding, at least one if we are married. We have seen a bride almost faint or fall right out because she locked her knees. We have seen the groom struggle to get the ring on the bride’s finger, or the other way around. We have sat in the freezing cold or the sweltering heat. In our wedding, Cindy and I knelt on a kneeling bench to take communion together as our first act as a married couple, and when I stood, the knees of my tuxedo pants were pasty white from the talcum powder that my groomsmen had so helpfully put on the bench.

We all have stories about weddings. But at the end of the day, as long as both bride and groom showed up and made vows to one another in the presence of God and those who witnessed the event, at the end of the day they are … married. No longer single. The two had become one. In this biblical math that refers to marriage, one plus one equals one. God said it in the creation account of the first marriage, “A man shall leave his father and mother, hold fast to his wife, and the two shall become one flesh.” It is a profound mystery, isn’t it? That God would join a man and a woman together and transform not only their lives, but the lives of their children, and the lives of those in the church and community where those two put Christ’s love affair with his church on display.

Though the mystery is profound, it is not always permanent. It is always two sinners who marry, and even though they may be saved by grace, not only husband and wife in this life but brother and sister for all eternity, marriage is difficult. I believe it is at the same time the hardest and the most glorious thing we do this side of heaven: to stay married to the same person for a lifetime. I also understand that there are times when it is good to separate, as in the case of abuse or other dangerous circumstances. The exceptions do not change the norm, however, which is to stay together.

Jesus repeated the founding principle for marriage in Matthew 19, and added, “What therefore God has joined together, let not man separate.” Paul repeated the same principle at least twice. What’s the point? The biblical foundation for marriage between one man and one woman for life could not be clearer than it already is.

Have you ever seen a video review of a play on an NFL game? The catch was called a touchdown, but the opposing coach throws a challenge flag because he thinks the receiver stepped one toe out of bounds as he raced for the end zone. You see the replay 50 times, and there is no question that the receiver was in bounds. So the referee finally says, “After further review, the calling on the field is confirmed.” That’s what the Bible says about marriage for a lifetime. God said it more than once. Jesus said it more than once. Paul said it more than once. After further review, the calling on marriage is confirmed: what God has joined together, let not man separate.

May I suggest to you what you already know if you are married? Divorce should not be an option, should never be discussed, or threatened, or hinted at, or even thought about. My wife of 36 years told me recently that she determined early on not to allow herself to ever even think about separation or divorce. That’s what I call, “taking every thought captive to obey Christ.”

If you are ready to throw in the towel, it’s too early to quit. Get help from biblical counselors. Cry out to God. Speak and do what communicates love to your spouse.

Marriage is hard. But it is worth the fight to stay together.