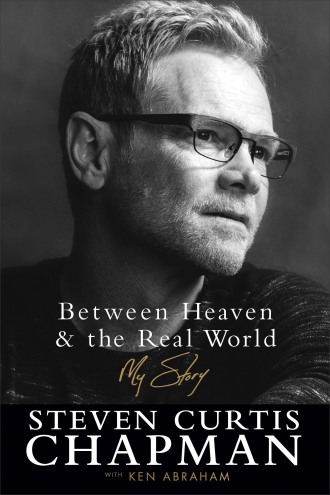 Many of my readers will remember the tragic story of the death of Steven Curtis Chapman’s adopted daughter, Maria. She was killed in the driveway of their home in 2008 when she ran into the path of a car driven by her brother, Will Franklin. The final third of the book takes the reader through that gut-wrenching event, the grief that followed and continues to this day, and the story of how God brought Steven and his music of hope back to the stage. You will fall in love with this little girl adopted from China, and you will be in wonder over how it seems God prepared her for what was to come.

After a flash forward to Steven’s debut at Carnegie Hall, the story begins in the tiny town of Paducah, Kentucky, in the early 1960’s. Steven’s brother, Herbie, was born in 1960, and Steven Curtis came along two years later. The two boys were raised by a father who was as gifted in music as he was possessed by an uncontrollable temper. Both boys lived in fear of upsetting their father, and Steven recalls the time he was trying to help his dad restore an old Army jeep. His dad asked for a nine-sixteenth wrench, and Steven ran to the toolshed and searched for it until he had just the right part. But when he got back his dad said, “Just lay it down, I don’t need it anymore.” Steven’s face fell, and then his dad asked for a Phillips screwdriver. Again he raced to the toolshed to find one, only to be told when he returned that it wasn’t needed. Several years ago, Steven saw the Bruce Willis movie, “The Kid” (incidentally, my wife’s favorite movie), and there’s a scene where the young boy in the movie finds the missing screw his dad had been looking for in his pocket, and his dad got angry at him. Steven said he cried so uncontrollably during that scene that his oldest son, Caleb, reached over to pat him on the back and console him.

The family dynamic changed completely when Steven’s father, Herb Chapman, became a Christian. Instead of sending the boys off to church with their mother every week, now Herb was leading his family. The family started singing together at church, Herb was eventually asked to be the music minister, and the seed of a songwriter was beginning to develop in Steven’s heart. He is today the singer-songwriter who has won more awards in contemporary Christian music than anyone in the industry, including 5 Grammys and 58 Dove Awards. You will read about how God opened the door for Steven in a music career, and how this man of faith has used his enormous talent to promote the good news about Jesus. Since a mutual friend, Larry Warren, first introduced me to his music in the early 90’s, I have been a fan.

I had a hard time getting through the chapter about Maria’s death. The pain is as raw as it gets, and I felt the full gamut of emotions Steven and his family went through in their loss. It is hard. But it is also a story that, I believe, can bring help and healing to any of you who have lost a child. I have never walked that road, but I know many of you have. You will be able to identify with Steven and Mary Beth Chapman, and I trust, you will be helped by their story.

Read this book. You will be glad you did.