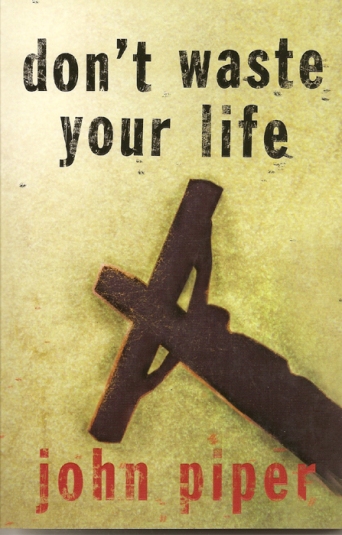 As we slog through a very painful election cycle, I am reminded of a book I read several years ago. John Piper’s book, “Don’t Waste Your Life,” reminds us of what is significant when we can easily feel bludgeoned or discouraged by what we see happening in our nation and in the world around us. The book is an easy read, less than 200 pages, and the title is appropriate. Piper hammers the point through 10 chapters that we have been created by God for a purpose, and that all of creation is searching for a “single passion to live by.”

He recalls the memory from his childhood of his evangelist father leading an elderly man to Christ. The church had prayed for this man for years but he had resisted. But not on this day.

God opened his heart to the Gospel of Christ, and he was saved from his sins and given eternal life. But that did not stop him from sobbing and saying, as the tears ran down his wrinkled face…“I’ve wasted it! I’ve wasted it!”

Piper said that this story gripped his heart as a child more than the stories he had heard of teens killed in car wrecks before they were converted — this story of “an old man weeping that he had wasted his life.”

One chapter in the book is titled, “Risk is Right — Better to Lose Your Life than to Waste It.” Paul wrote, “If God is for us, who can be against us?” If this verse is true and applies to you and me who know Christ, then what are we waiting for? As Woodrow Wilson said, “I would rather fail in a cause that will ultimately triumph than triumph in a cause that will ultimately fail.” And the cause of Christ will triumph!

One of the most challenging stories in Piper’s book was taken from “Flags of Our Fathers,” by James Bradley. This book details the battle for Iwo Jima in World War II and the lives of the six flag-raisers at battle’s end. Here is an excerpt:

Often it was the corpsmen [medics] themselves who died as they tried to preserve life. William Hoopes of Chattanooga was crouching beside a medic named Kelly, who put his head above a protective ridge and placed binoculars to his eyes — just for an instant — to spot a sniper who was peppering his area. In that instant the sniper shot him through the Adam’s apple. Hoopes, a pharmacist’s mate himself, struggled frantically to save his friend. “I took my forceps and reached into his neck to grasp the artery and pinch it off,” Hoopes recalled. “His blood was spurting. He had no speech but his eyes were on me. He knew I was trying to save his life. I tried everything in the world. I couldn’t do it. I tried….And all the while he just looked at me….The last thing he did as the blood spurts became less and less was to pat me on the arm as if to say, ‘That’s all right.’ Then he died.”

John Piper’s plea is that he will be able to come to the end of his life and say to the generation he served and lived in, “For your tomorrow, I gave my today. Not just for your tomorrow on earth, but for the countless tomorrows of your ever-increasing gladness in God.”

Need encouragement in these discouraging times we live in? “Don’t Waste Your Life” will challenge, convict and motivate you. It may even change your life.