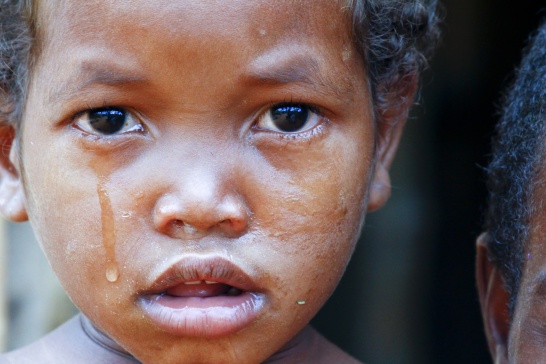 Susan is a 14-year-old girl who lives in a Muslim family in Uganda. One day a person spoke at her school about Jesus, His sacrifice for our sins, and how a person can be redeemed through faith in Him. That day, Susan gave her life to Jesus. When she got home and her father heard about it, he grabbed Susan and her brother by the hair and dragged them into the front yard. He put a knife at her throat and told Susan that he would kill her and her brother if she did not stop talking about her faith in Jesus. Susan did not stop. So her father took her to a room in the house where there was a single mat on the floor. He made her sit on the mat and said, “You will not get off of that mat until you renounce your faith in Jesus.” Then he locked the door. And he didn’t open it again for three months. The only way Susan survived was that her brother would dig a hole under the door and pour water into it. Susan would lean over from the mat and lap up the water. He fried bananas and put them under the door so she wouldn’t starve. One day the neighbors asked the brother where Susan was. He told them and they called the police. When they opened the door, they were horrified to find Susan, barely alive, weighing only 44 lbs., her bones beginning to deform because of the way she had sat for three months. When asked why she had never moved from that spot, had never gotten off the mat, Susan said, “Because my father told me that if I got off the mat, I would be denying Christ.” (Open Doors USA)

I thought about that story as I read what the book of Hebrews says of prophets of old: “They were stoned, they were sawn in two, they were killed with the sword.” Those words, written nearly 2,000 years ago, are just as true today. In many countries, and the number is growing, those who speak the truth about Jesus, as Susan did in Uganda, suffer and sometimes die because of their testimony. James writes in his letter, “As an example of suffering and patience, brothers and sisters, take the prophets who spoke in the name of the Lord.” It’s vital that we understand as followers of Christ that patience and suffering are traveling companions. We grow in patience if we suffer well, and we suffer well by practicing patience in the midst of the trial, by looking to the Lord to be the lifter of our head.

What do we learn from the prophets and from testimonies like Susan’s? First, God allows suffering in the lives of those who speak for Him, so that their life will back up their message. Second, we are not to go silent in times of suffering. The will of God does not lead us where the grace of God cannot keep us. Even the sword cannot separate us from the love of Christ.

I am thankful for my Ugandan sister whom I have never met. Her story of faith in Jesus, no matter the cost, moves and inspires me. She inspires me to pray for her and the millions of Christians around the world who suffer simply because of what they believe about God. And it inspires me to stand and speak about Him who is the author and the finisher of our faith. He is worthy of any price that I have to pay.

One thought on “We learn to be patient in suffering”