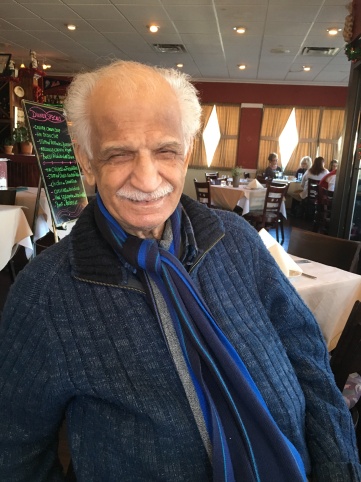 That was one of the statements Benyamim Tsedaka made in our 90-minute meeting for lunch a few weeks ago. Benyamim, who prefers to be called Benny to make it easier for Americans, is a 125th-generation Samaritan who knows his history and is on a mission to help others know it as well, so lessons may be learned and tragedies avoided.

The Samaritans are a tribe of Israelites that once boasted more than a million people in the 5th century, and dropped as low as 141 in 1919. Now there are 800 Samaritans, but that number is growing again. From the ancient tribes of Ephraim, Manasseh and Levi, the Samaritans live in or near Mount Gerizim in Israel, and follow only the first five books of the Old Testament, or, the Pentateuch.

Benny says the Samaritans and Jews are two brothers of the same nation, and he travels throughout the world for two months every year, meeting with world leaders and representing the Samaritan people. When he and I met with JL Williams and Margaret Wooten (the Wootens are Benny’s “adopted family” in Alamance County), he had just come from a meeting with one of the members of President-elect Trump’s transition team.

Benny has quite the resumé. He served in the Israeli Air Force in the 1960s. Since 1969, he has served as chief editor of The Samaritan News, and has published 122 books. He is a choir director, the honorary chairman of the Samaritan Basketball Team, and since 2007, he has chaired the Samaritan Medal Committee for Peace and Humanitarian Achievements.

Benny spoke at length about the need for the Samaritans to have support from our nation. When he met with 6 members of the State Department in Washington, D.C. last month, he told them, “We are between two sides and need the U.S. and Great Britain to support us. We do not have an army. We are for peace.”

Benny and I disagree about who Jesus Christ was. The Samaritans see him as only a prophet. Christians believe Jesus is who he claimed to be: the Son of God and the Savior. But there are many things we can agree on, and I enjoyed learning from Benny about the Samaritans.

A Samaritan male baby is circumcised on the 8th day, as Scripture teaches. Benny said an incubator is considered an extension of the womb, so a premature male will be circumcised exactly 8 days after leaving the incubator. Every Samaritan child studies the Pentateuch in school. He or she learns to read it in ancient Hebrew and in modern Hebrew. They are able to speak and to read the ancient language, and conclude reading the Torah at 6 or 7 years old.

He said there is no conflict there between the older generation and the young, because hypocrisy is not tolerated. He laughed as he said, “I always say to a young person, ‘Show me what I am asking you to do that I am not doing myself?’”

The stages of marriage are clear. First, a young man and woman must receive the consent of their parents. Then, they are engaged. Finally, they are married. Sounds just like America, except that step one is rare these days, wouldn’t you say? Maybe we are missing something, because Benny says that in the last 100 years, there have been fewer than five divorces among the Samaritans.

Benny Tsedaka is on a mission as a good Samaritan to teach the world about a precious people. I wish him the very best.