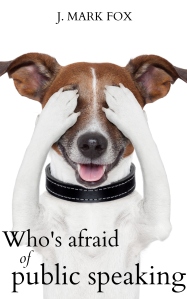 How many of you are nervous about giving speeches? Get the butterflies, sweaty palms, cotton mouth? What’s the answer? Lick your palms!

No, the answer first of all is to relax and realize that EVERYBODY gets nervous about giving a speech. It is the number one fear. When people are surveyed every year and asked, “What is your greatest fear?” they don’t say

spiders or snakes or height or even nuclear attack. They say, “Public Speaking.”

41% of people say their number one fear is public speaking,

followed by the answer given by only 18% of the people as their greatest fear: death. Does that mean that most people would rather die than give a speech?

Maybe so! But it should help you to relax a little to know that everyone gets nervous before they give a speech. Do you know why we are nervous about speaking? Two things, working together: Number One, we care about the outcome. Number Two, we are uncertain about the outcome. Think about it. If either one of those goes away, we are not going to be as nervous.

Let’s say one college guy says to his roommate, “Hey, my girlfriend is coming to town this weekend, and she’s bringing a friend. Would you mind going on a blind date with her?” Let’s say the roommate has NO interest in anything romantic right now, he’s too busy with work and school, and really doesn’t care about a relationship. Is he going to be nervous on the date? Probably not. He doesn’t care! But let’s say he is desperate for a relationship with the opposite sex, and he wants badly for this blind date to go well. Is he going to be nervous? YES!

OK, back to the subject of presentations, let’s say we cannot remove “I care” from the equation, and we really shouldn’t want to. So that leaves the other component, “I am uncertain about the outcome.” How do we remove the uncertainty, or at least lessen it a great deal?

Well, I am going to give you the #1 antidote for nervousness right here, the one the professionals use, the one that is guaranteed to reduce or even nearly eliminate your nervousness about the speech or presentation you are going to give. Are you ready? And it has nothing to do with underwear. You ready?

It is………..practice. That’s right. The magic bullet, sure to slay the werewolf of nervousness is practice. In fact, there is an inverse proportional relationship between nervousness and practice. As practice goes up, nervousness comes down. A good rule of thumb to follow is that your preparation and practice time ought to equal about 30 minutes for every minute that you will be speaking. If you are giving an 8-10 minute speech, then, your preparation time should be at least 4-5 hours. That’s doing the research, writing the outline, organizing your points, finding good illustrations, and then PRACTICING the speech in its entirety at least 10-12 times. And practice in front of an audience (even an audience of one) if possible, and practice in front of a video camera or at least a tape recorder.

You see what happens? The more you practice, the more comfortable you get with your speech and its ideas and with the whole process of speaking in front of an audience, the less uncertain you are about the outcome, and the less nervousness has a chance to control you.

Check out my e-book on the subject! https://www.smashwords.com/books/view/420735