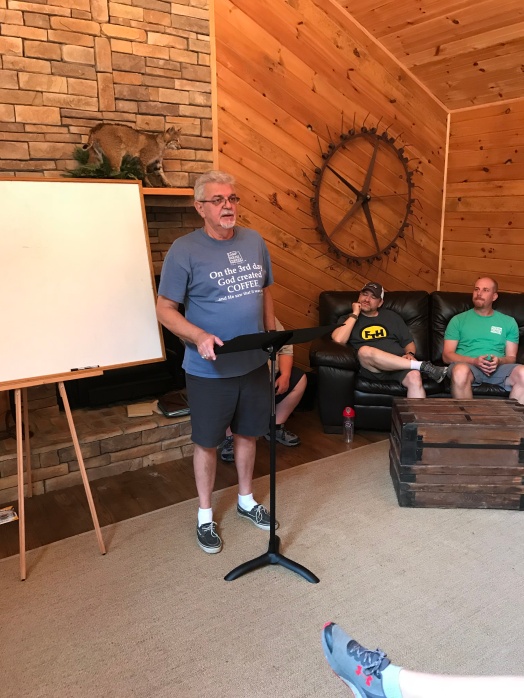 Have you ever heard of Lynch, Kentucky? I hadn’t either, until a few years ago. This past weekend, I got to experience what God is doing there firsthand, as 54 men and young men from Antioch had our annual retreat at Shekinah Village. That’s a youth camp and conference center tucked in a valley in the Appalachian Mountains. It’s a wonderful place that offers fishing, horseback riding, hiking, and much more. And we all took advantage of the recreational and educational activities, including touring what was once the most productive coal mine in the nation, until it was shut down in 1963. But what we came back talking about was what God shared with us while we were there.

All of the people who work at Shekinah Village, or at any of the ministries that are under the umbrella of Meridzo, do so without a salary. No, they are not independently wealthy, except in faith. They trust God to supply their needs, and we heard story after story about how that is happening.

Meridzo Ministries began when Lonnie Riley left a senior pastor position in a mega-church in 1999, sold his big house and nice cars, and moved to Lynch, believing that God was sending him and his wife there to serve the people of Harlan County. Their website states, “30,000 missionaries have visited the Lynch, KY area over the last 10 years, and thousands of those ministered to have professed faith in Christ. These wonderful friends have assisted in bringing about physical and spiritual transformation to our region.” There were so many stories we heard, but one involved an African-American man, a Vietnam vet, who was living in a small house with no roof. Only a tarp covered his home, and the rain and snow had its way with him there. Lonnie heard about it and simply told the Lord that if he were given shingles, he would put a roof on the man’s house. The next day a woman called from Georgia and said she had 248 squares of shingles to donate. Do you need them?” Lonnie smiled and said, “Yes, as a matter of fact, we do.” The problem was they needed a truck to haul the shingles, so Lonnie prayed for a truck. A man called from western Kentucky to see if there was anything he could pray with Lonnie about. Lonnie told them they needed a semi. The man called back on the following Monday and said that a young man had been saved in his church recently. When the young man heard about the need for a truck, he called his non-Christian father who was in California. The father drove from California to Atlanta to Lynch at no charge. Three months later, the father became a Christian himself, as he saw that God was working in ways he could not explain. The vet’s house, by the way, took only 6 squares for the roof. They ended up putting new roofs on dozens of homes all over Lynch.

I had read Lonnie’s book, “Miracle in the Mountains.” It reads like something out of the book of Acts. I had heard about this ministry from my son Caleb, and from Scott, Joseph and others who work at Feed the Hunger, and who regularly send food to Lynch. But seeing it for myself, and meeting the men and women who have given up everything to go and work there and serve there? That was a game-changer for me. And for all 54 of us from Antioch.

During our final time of worship and testimonies on Saturday morning, one of the men said what we all were feeling. Todd said, “We cannot all leave our jobs and come to Lynch. There have to be people whom God calls on to supply the needs for that kind of ministry. But we can all live more simply, give more, and live by faith more. That’s the lesson I am taking back home.”

I thank God for Meridzo Ministries, and for allowing us to be a part of what he is doing there.

One thought on “One Town You Ought to Visit”